We arrived at the campus of Shepherd’s Hill Academy a little early for our appointment. As we arrived, an alert white lab greeted us cautiously, checking to determine if we were friendly visitors arriving on the peaceful property. We began our visit in the office, where we met Trace Embry, Co-Founder and Executive Director. We talked about the miracles surrounding the origins of the school and Trace explained the philosophy behind the program. Shepherd’s Hill operates on the premise of truth first and modifying behaviors through loving example.

Trace also explained that although Shepherd’s Hill Academy accepts both girls and boys to the program, the students are rarely around each other. There is an emphasis on keeping both genders primarily separate. The girls see Mary Anne Brookshire, the therapeutic counselor for the girls’ program. We met Mary Anne as we left Trace’s office. She was very friendly and full of energy, both necessary for sharing the love of Christ with the girls she works with. Freddy Akins is the therapeutic counselor for the boys. In addition to therapy, the girls and boys do their classes completely separate from each other. Most importantly, however, Shepherd’s Hill maintains a 5:1 student to staff ratio.

We left the office and headed over to a covered area where the students participate in equine therapy, which is led by EAGALA certified instructors. Above this area was a nice chapel where Shepherd’s Hill not only does church services, but they also enlist speakers to come in and teach the kids.

As we left the chapel we could hear girls talking on the porch below. We discovered four girls in a Spanish class practicing a skit and interrupted briefly to talk with them about their stay. What we found when talking to the girls in the class was that when they came, they felt entitled and with poor relationships especially with their families, and although they were intelligent, they experienced school failure. We thanked them for letting us break-in and walked over to the classroom where the rest of the girls were just finishing a drama class. As we interacted with them, Trace gave an open invitation to anyone who wanted to share anything they wanted to about life at Shepherd’s Hill. Several girls spoke up and explained they had come with poor relationships and no structure but several had found faith and healing in the program. Many talked about how their relationships with family had improved dramatically. In an intriguing twist, Trace asked the girls if there was anything they struggled with about the school or anything that they would like to see run differently. A couple of girls spoke up and honestly spoke about the couple minor things they thought were unfair. Getting up early was the biggest complaint.

Shepherd’s Hill offers a private academy that is fully accredited by the Georgia Accrediting Commission and meets the course requirements for the Georgia Department of Education Curriculum. The Principal and Education Team give each child individualized attention and works with them to create a class schedule customized to meet their specific academic needs. All teachers are state certified and the board approved.

After hanging out with the girls a little longer, we left and walked down to the pavilion to talk a little more about the acreage and the layout of the property. Trace showed us the beautiful campus, but he also showed us the large barren gash of red dirt through the middle of the back yard of SHA. Currently, the state of Georgia has claimed 14 acres of the campus and is building a highway through the middle of it, cutting off 20 acres on the other side. As a result, SHA was able to acquire an additional 20 acres on the near side to move the boy’s campsite too. When the highway is complete, the girl’s village will have to be moved as well.

After we left the pavilion, we walked over to the cafeteria that used to be a local café. Across the driveway from the café was the boy’s classroom, and in the same vicinity was the next step house. We saw the shower room where students get ready for school each day and where their clothes are kept. Finally, we walked down to the boy’s village.

We walked through a horse pasture and down a path until we came to a moderate campsite in the woods. There was a campsite kitchen, complete with picnic tables and piles of wood for the campfire. Students live in primitive shelters until the last 12 weeks of their stay. These shelters are meant to be temporary, made to last no more than five years so that there is a constant state of building projects taking place. The students, with supervision from staff, do all the work and maintenance in the village. Each shelter consists of tarp and screen walls, wooden floors and tarping for the roof. The shelters looked and felt amazingly like summer camp, yet secure and well built. There were bunk beds for 6-8 students and a staff member, and each had a locker that contained necessities.

At 12 weeks, students move into the transition home where they work on independent living skills and reintegration to technology. They continue to work on the school as well.

We left the campsite and headed back to the office where we spent some time talking with Beth Embry who does all the admissions and enrollments. Afterward, it was time for us to let the Embrys get back to what they do best, running a program where the love of Christ helps struggling kids find their way to successful adulthood. We thanked them for the visit and drove away. 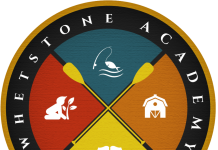