Saturday, June 25, 2022
StrugglingTeens The Original Website Of Information On Schools And Programs For Teens And Young Adults
Paid Advertisement

Despite the continual threat of lost GPS signal, we had no problem finding our way to Whetstone Academy in South Carolina. Whetstone Academy is a nurturing, home-like environment for boys, ages 10-14 on the milder, higher functioning end of the spectrum, ADD/ HD, school refusal and/or NLD. Many of the boys also have anxiety and depression issues, family conflict and a difficult time with other relationships.

As we drove up the driveway, it felt like we were headed into a remote campus deep in the thick of the woods. We turned a corner and suddenly there was a cultivated orchard of newer decorative pear trees lining the drive and as we continued down the road, the view opened onto a beautiful and serene 2.6 acre, manmade lake. We continued past the lake and drove up the driveway to the house, pulled into the parking where all the other cars were. We climbed out of the car and the sound of boys playing rang out across the campus. We quickly located the source, several boys were preparing to ride bikes, several were playing basketball and a third group was in the garden.

Sharon Stricker, Head of School and Admissions for Whetstone Academy, walked up and greeted us at the main house. The house consists of the administrative offices, therapist offices, a classroom and housing for 6-8 boys. Once inside, we walked straight through the main room, which opened to a glass front facing the lake. After walking out on the back deck to take in the view, we headed into Sharon’s office to talk about the program before touring the facility.

Whetstone Academy is located on a beautiful 57-acre campus. They have created a Montessori environment where boys experience school in a natural setting. This environment allows the boys to learn while also learning about the world around them. Teachers, therapists, and counselors are all actively involved with the boys throughout the day. The boys are broken into three groups for school, separated by grade level. The first part of the day involves a math, science, a psych-educational group, and English or history. The Erdkinder (or “Earth children”) courses promote a hands-on, experiential style of teaching. Boys learn how to problem-solve and use critical thinking skills. They also develop strong relationships and learn to trust again.

After we talked about the origins of the school and the Montessori component, we met Jeremy Nunnelley, the Clinical Director. Jeremy is responsible for supervising the clinical staff, holds weekly family therapy calls with all of the boys and their families and coordinates all the therapists and counseling staff. The counselors run group sessions, which typically focus on adoption issues, grief, depression, bullying, deep anxiety and fears. The goal is to get to the root of the behavior and this is front-loaded on the boys when they first arrive. The clinical staff introduces them to the work they will have to do and explain that their work will be at a deeper emotional level. By introducing this concept in the beginning, the staff finds that the boys are much more likely to work harder. Approximately 75 percent of the boys attend a wilderness program prior to arriving at Whetstone.

In addition to schooling and therapy Dr. Darrell Yardley comes to campus three times a month to do equine-assisted therapy with the boys. Private music lessons are also available if there is interest. Some of the other activities include rec sports activities in surrounding areas, drama and theater and white water rafting.

We left Jeremy’s office and Talina Carver, Director of Student Life, toured us around the campus. Leaving the main house, we walked down toward the second home. On the way, we passed the “barnyard”, for two donkeys, two goats, two geese, chickens, guinea hens, a pig, and a duck. Whetstone is also home to two rescue dogs and two cats. Beyond that was a concrete slab for playing basketball and using ripsticks and skateboards, and near that, above the house, was a garden where the boys each have their own 4X4′ garden plots.

In the second home, there are additional bedrooms housing 16 additional boys, the kitchen and dining room, laundry room, and a second classroom. The boys’ bikes and sports equipment are also housed in this building. Here we met James Holcomb, Director of Operations and Science Teacher, and Daniel Capps, the Math teacher. Daniel has a background in Special Education and is currently working on his Montessori certification.

There was an excitement among the boys as we walked around the campus. We soon learned that two of the boys would be graduating that afternoon. There would be a special ceremony involving symbolically canoeing across the lake with a pear tree, then meeting their family on the other side and planting the tree in the orchard lining the driveway as a symbol of their growth and a chance to give back to the school.

We left the second home and met Butch Clay, the Montessori Director, English, History, and Social Studies teacher. He talked with us more on the academic component of the program at Whetstone as we walked over to the graduation circle to make sure everything was prepared for the upcoming graduation. Then we returned to the second home for lunch.

We spent some time with a sixth-grade boy who had been at Whetstone for over a year and an eighth-grader who had been there for only six months. We were impressed with their candid conversations, curiosity and their attitudes about the program and their personal accomplishments.

The two boys and several others joined us for a wholesome lunch of chicken and dumplings, rice and fruit salad. The atmosphere in the dining room was innocent, light-hearted and jovial as we watched all the students go through the lunch line. We met all of them as they waited their turn and witnessed their personal relationships with each of the staff members. It was a good chance to see the boys in their natural environment. Not only is this school set on a beautiful and healing campus, but the overall atmosphere is also one where boys can learn to be boys again. After lunch, it was time to head out. We thanked the boys for their kindness, said goodbye and drove away. 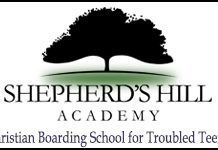